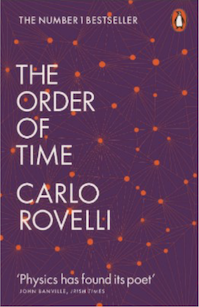 The Order of Time

“People like us who believe in physics, know that the distinction between past, present, and future is only a stubbornly persistent illusion.” -Albert Einstein

Over the last 150 years, our understanding about time and space has undergone a radical transformation. In ‘The Order of Time’, the Italian physicist Carlo Rovelli, explores the illusion of time, calling it the “greatest mystery”.

In the first section of the book, the author profoundly weaves together science, art, history and philosophy to confute the intuitive characteristics of time, such as singularity, uniformity, ubiquity and independence.

Time passes slower at sea level (closer to the centre of gravity) than at higher altitudes (away from the centre of gravity) –implying that time is neither independent nor singular. Through Einstein’s work on gravitation and its influence on space-time fabric, the author explains how time passes slowly closer to heavy bodies. The extent of slowing of time also depends upon the mass of the body exerting gravitational force; thus, time stops (or passes infinitesimally slowly) closer to a black hole.

The author explains that ‘now’ is highly localised and becomes redundant beyond our immediate surroundings.For example, it takes 499 seconds for the light from sun to reach our eyes; thus, whenever we see a sunrise, we are witnessing an event that happened ~8minutes ago. Similarly, if you use a telescope to observe an alien lifeform on a hypothetical planet 10 light years away from Earth, you will see what the alien was doing 10 years ago. Theoretically, if that alien lifeform travels at a speed faster than the speed of light to reach Earth and knocks on your door, you will be able to see the alien on its planet (through telescope) as well as on Earth, simultaneously. Since light, sound and other waves require time to travel, there is an actual latency in our apparent environment. Hence, there is no present.

Drawing upon the works of physicists such as Ludwig Boltzman and Sadi Carnot, the author explains that the second law of thermodynamics (‘law of entropy’,∆S ≥ 0), is the only law which can distinguish past from future. “The difference between past and future, between cause and effect, between memory and hope, between regret and intention… in the elementary laws that describe the mechanisms of the world, there is no such difference.”

To explain, entropy is a physical system’s natural tendency to drive new chains of events. Since it is impossible to reverse a system back to its original state at a microscopic level, entropy once increased, never decreases. For example, even though you make your bed in the same manner every morning, with a particular arrangement of pillows and duvet, there will be new creases and folds that did not exist before you went to bed the previous night. Or, when you put an egg in some water and add heat, you get a delicious snack. If you take the heat away you don’t go back to the original egg – an irreversible process.

As the total entropy of a system always increases, it differentiates past from future. Therefore, it is often called ‘time’s arrow’. For instance, the Roman Empire didn’t collapse due to the passage of time, but because the longer it existed, the greater the level of entropy – ballooning debt, balance of payments crises, rebellions, pandemics and barbarian attacks. The increase in entropy is the reason for evolution, for history and for the perception of the passage of time. Conclusively, the moment entropy ceases to increase – i.e. nothing changes –time stops.

The idea that change – as epitomized by entropy – is fundamentally more natural than time is a recurring theme throughout the book. “The entire difference between past and future may be attributed solely to the fact that the entropy of the world was low in the past.”

In the subsequent sections, the author delicately balances scientific realism, theoretical physics and philosophical romanticism, to elucidate how our perspectives have limited our understanding of time –time is convoluted and made of complex layers. The author explains that time is a logical outcome of events and processes and that viewing the world as a collection of interrelated events will enable us to comprehend it better.

‘The order of Time’ is highly engaging and grips the reader’s curiosity. Carlo Rovelli’s ability to simplify complex subject-matter through poetic writing is evident throughout the book. The author brings together numerous hypothetical and historical examples – such as the need for standardised time to facilitate scheduling of trains in the 19th century – to expound the nature of our relationship with time and the evolution thereof. The book successfully captures the reader’s imagination through the scientific expression of going beyond the obvious to seek answers, compelling them to read more on topics such as time, blackholes and relativity.

Boom and Bust: A Global History of Financial Bubbles

The avoidance of buying into the peak of booms and selling at the bottom of a bust is one of key skills of any investor. But what causes them? This book attempts to answer that question by a close analysis of historical market manias.

The Election That Changed India

The 2014 Indian general election has been regarded as the most important in Indian history since 1977, following Indira Gandhi’s imposed state of emergency in 1975.

It starts in 2012, when Narendra Modi won the Gujarat state elections for a third time, but quickly set sights on the bigger prize, then covers the scandals that crippled UPA-II (United Progressive Alliance, the ruling coalition), before moving to the strategies of team Modi, and the extraordinary missteps of Rahul Gandhi.

Between the Devil and the Deep Blue Sea

Between the Devil and the Deep Blue Sea is a narrative of tragedy, extreme hardship, and bravery. Using first-hand accounts taken from the survivors, Freeman tells the story of 3 cargo ships and their crews kidnapped by Somali pirates and held hostage for five years, and in some cases longer.

No investments or services mentioned on this website are directed at U.S. Persons who are not Professional Clients or Eligible Counterparties as defined by the UK Financial Conduct Authority (FCA) Handbook or Qualified Purchasers as defined under the Investment Company Act of 1940. The information contained herein does not constitute a distribution, an offer to sell or the solicitation of an offer to buy any securities in any jurisdiction in which such distribution or offer is not authorised.

THIS WEBSITE IS ONLY MADE AVAILABLE TO PROFESSIONAL CLIENTS AND ELIGIBLE INVESTORS AND COUNTERPARTIES.

ODAM does not manage money for retail clients. Eligible investors only may access ODAM’s expertise through the funds or investment companies for which it acts as investment manager.

This website is not directed at you if Ocean Dial Asset Management Limited (“ODAM”) is prohibited by any law of any jurisdiction from making the information on this site available to you, and is not intended for any use which would be contrary to local law or regulation. This website and its contents are not intended to sell services or products over the Internet, rather for Internet viewer convenience and information purposes.

Investments may fall as well as rise and investors may lose a substantial portion or even all of their investment. Past performance is not necessarily a guide to future performance.

Investments denominated in foreign currencies can result in the risk of loss from currency movements as well as movements in the value, price or income derived from the investments themselves.

Investment in emerging markets involves risks which may not be typically associated with investing in more developed markets. Investment in small- and mid-cap stocks may also involve a higher degree of risk as these markets tend to be more volatile than their larger capitalisation counterparts.

To the extent permitted by relevant law and regulation, ODAM expressly disclaims any and all liability which may derive from this website or any other information provided by ODAM in connection with this website, and any errors therein or omissions therefrom. The description of the investment management services and processes provided by ODAM in this website is written in general terms. The services and investment funds referred to in this website should not be regarded as an offer nor solicitation for such services or investment funds in any jurisdiction where such offer or solicitation is unlawful. The terms and conditions applicable to individual investors investing in investment funds managed by ODAM are set out in each relevant fund’s offering document. This website contains information designed only to provide background material for determining whether or not to consider investment. This website should be read in conjunction with the relevant offering document for each fund. All potential investors must carefully read the offering document which will contain significant additional information needed to evaluate investment in the fund and important disclosures regarding risks, fees and expenses. The offering document is the sole document upon which potential investors should rely. Recipients in any doubt about the content of this website should seek advice from an independent professional adviser.

This website is based upon information that is considered to be reliable but ODAM does not represent or warrant that it is accurate or complete, nor should it be relied upon as such. Views and opinions expressed within this website including comments on sectors or individual stocks or companies are those of ODAM and its Mumbai based affiliated company Ocean Dial Asset Management India Private Limited (a company incorporated in the Republic of India) as at the date of publication. Subsequent events may cause these views to change. The investment policies and procedures described are guidelines and not rules. Occasional deviation from the parameters given may result.

Use of links
The ODAM website may contain links to websites operated by other parties. ODAM does not control the content or accuracy of information on such websites and does not in any way confirm or endorse the material placed on such sites. The links are provided for your reference only.

Governing law
You agree that in the event of any dispute of any nature that may arise between you and ODAM, these terms and conditions shall be governed by and construed exclusively in accordance with the law of England and Wales and you agree to be subject to the exclusive jurisdiction of the courts of England and Wales.

Privacy policy
Any personal information that you supply ODAM via the website and other means will be held in accordance with the General Data Protection Regulation – please see our privacy notice for more details . If you would like to be removed from our database at any point, please email your request to enquiries@oceandial.com

Use of cookies
For the purposes of gathering data to measure traffic and patterns of usage on our website, we need to use your IP-address. In addition, for example, we use cookies to ascertain as to whether you have agreed to our disclaimer.
A cookie is a small file held on your PC. If you do not want to accept cookies, you will need to alter the setting on your internet browser. We will not use your IP-address or any cookie to identify you personally.